Make a vegan version of this classic American dessert! This vegan cherry pie takes less than ten minutes to prep, uses minimal sugar, and can easily be made gluten free.

If you are feeling lazy, you can throw the frozen cherries straight from the package into your bowl of ingredients. However, I recommend cutting the cherries in half because I find that they release more flavor this way.

In addition to the frozen cherries, you will need sugar, lemon juice, lemon zest, corn starch, and a frozen pie crust. To make this recipe fully gluten free, use a gluten free pie crust.

For the lattice pie crust (optional):

If you're a fan of pies, you might also enjoy these other vegan pie recipes: 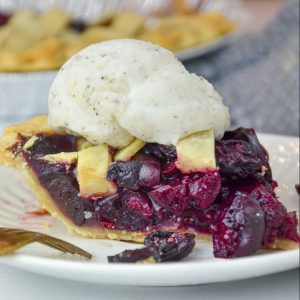