When I was twenty years old, I lived in Granada, in the Andalusian region of Spain. The time I spent in Spain made me completely fall in love with it. I could go on all day about how amazing the people, culture, and nature of Spain are, but we are of course here to talk about the food. Speaking of food, I would argue that there’s no dish more associated with Spain than paella. In this recipe, I share how you can make a vegetable quinoa version of Spanish paella.

Have you ever seen those memes on the Internet about people who lived abroad that annoyingly can’t stop talking about the time they lived abroad? I sometimes think that meme was written about me. Even after four years, I still get excited when someone brings up Spain. But seeing as this post is about Spanish food, I’ll allow myself to ramble on a bit.

Paella originates from Valencia, a coastal city in southeastern Spain. It’s made with short grain rice, vegetables, and usually some sort of meat or seafood. The key spice in paella is saffron- this gives it its distinct flavor and yellow color. Paella is cooked in a wide shallow pan over an open fire.

This isn’t exactly a traditional paella, but a vegan and gluten free vegetable quinoa version. Just as delicious and packed with protein and lots of veggies!

The only tricky ingredient to find from this list is saffron. Since it’s not widely used in the US, I was only able to find it at Whole Foods, and it was a bit expensive. However, it is such a key ingredient in paella that I recommend trying to find it if you’re going to make this recipe. A simple Google search should point you to which stores in your area carry it.

If you really can’t find it, not to worry. You can add a little more of the paprika and turmeric to the recipe instead. 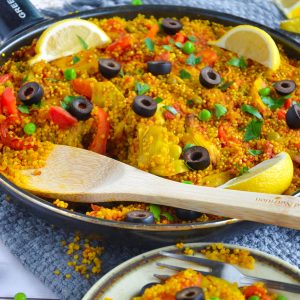 Keyword vegetable paella
Tried this recipe?Let us know how it was!
175 shares

One thought on “Vegetable Quinoa Paella”

My name is Gaby and I'm a 25 year old model/ food blogger! I have been vegan for five years and love experimenting with new recipes that are good for our health, animals, and the environment! You'll find my favorites here at Veggie World Recipes!