This vegan donut hole recipe is the perfect treat to satisfy your sweet tooth and it's even made with a healthy twist! These are vegan and gluten free, and made in the air fryer instead of being deep fried.

Making homemade donuts is actually super easy and requires just a few simple ingredients! Because these are made with healthy ingredients, you can easily enjoy these for breakfast or even grab on the go as quick energy bites!

What you'll need for your vegan, gluten-free donut holes

The full recipe with the exact ratios is at the bottom of the post, along with the nutritional information.

How to make the vegan cinnamon sugar donut holes

To a large mixing bowl, add all of the dry ingredients (flour, sugar, baking powder, and salt), followed by the wet ingredients (yogurt, coconut oil, vanilla). Combine them well, but be careful not to over mix.

Cover the bowl with plastic wrap or place the dough in an airtight container and refrigerate it for 15-20 minutes so it can chill and become easier to shape.

Once the dough has chilled, form balls that are about 1 inch in diameter. You will get about 8 donut holes from this recipe.

Place each dough ball on the baking sheet and then place in the preheated air fryer.

Bake the donuts in the air fryer at 350 degrees Fahrenheit for 8 minutes, flipping them halfway. You'll know they are ready when they start to become lightly golden brown.

Note: keep in mind that if you make the donut holes bigger or smaller, the bake time will change. Bake for less for smaller donuts, and give them more time if they are larger.

While the donuts are baking, prepare two separate bowls- one small bowl with melted coconut oil and one with the cinnamon sugar mix.

Once the donuts have cooked, give them just a few minutes to cool off at room temperature (this is so that you don't burn your fingers).

Dunk each donut in the bowl of melted coconut oil. Immediately after, roll them around in the cinnamon sugar mix.

These are best enjoyed when warm!

If you liked this vegan donut hole recipe, you might also like these vegan donuts and other easy recipes 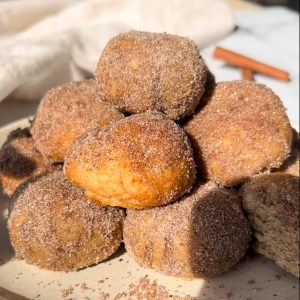 If you do it this way, you can even skip the shaping into dough balls part and place the dough in a piping bag and directly pipe the dough into the muffin liners.

Other toppings instead of cinnamon sugar

You can also make a sugar vanilla glaze instead of making these cinnamon sugar flavored with a little bit of dairy-free milk and powdered sugar. If you prefer chocolate flavored donuts, you can even make a chocolate glaze by melting together some chocolate and coconut oil and dunking the donuts in it. You can even just dip them in maple syrup, if you're really in a rush or are feeling lazy!

Why air fry instead of deep fry

Traditional donut holes are, of course, fried. This makes them super delicious and I'm personally a huge fan of regular, fried donut holes, but air frying is actually so much easier because it doesn't involve hot oil and a big mess. Not only that, but air frying them makes them a healthier choice.