A smoothie full of vegetables might not necessarily sound like your first choice of breakfast, but that's only because you haven't tried this cauliflower spinach green smoothie! Even with cauliflower and spinach as its main ingredients and no sugar added, this smoothie tastes sweet and delicious. You won't even realize you're getting in your daily dose of veggies.

Although cauliflower and spinach are the base of this smoothie, you actually really can't taste them. Cauliflower doesn't have a strong taste, but it does thicken up any smoothie to a perfect consistency. Not to mention all the nutrients you are getting. Same can be said about the spinach.

The only prep you will have to do ahead of time is to steam the cauliflower, and then freeze it. I have made many cauliflower smoothies before, and they don't work as well if the cauliflower hasn't been steamed first. Steaming the cauliflower makes it easier to blend smoothly later.

If you are using raw cauliflower, chop it into florets and throw it in a pot of boiling water. Steam it until it is so soft that you can easily stick a fork through it. Once you remove it from the heat and let it cool off, freeze it for at least several hours.

You can also buy already frozen cauliflower, and just throw that in the smoothie without any prep work. For some reason, store bought frozen cauliflower seems to work just fine in smoothies (I am guessing that they might steam it before?).

To make this smoothie, you will need a high speed blender. Add your frozen cauliflower, spinach, mango, kiwi, chia seeds, hemp seeds, and a date for sweetness. Blend and add almond milk or water as needed to make it as thick or liquid as you would like.

That's really it, not much to it! Smoothies are one of the quickest and easiest breakfast I can personally think of. Not to mention nutritious and delicious 🙂 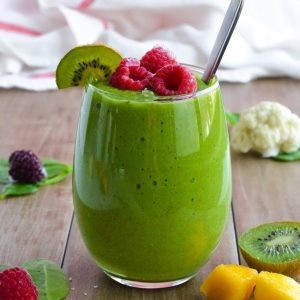