I love making oatmeal for breakfast. I usually make a simple oatmeal recipe and top it with some fresh fruit and nuts. But once in awhile, I like to make it more interesting. Adding caramelized bananas and peanut butter is such a delicious way to do that. It seriously tastes like you are having dessert for breakfast! Enjoy these caramelized banana and peanut butter oats.

There are two parts to this recipe- the caramelized bananas and the oats themselves.

To make the caramelized bananas, you will need bananas, coconut oil, maple syrup, cinnamon, and vanilla. Use ripe bananas for this recipe. They are sweeter and have more flavor.

For the oats, you will need oats, creamy peanut butter, almond milk, and a dash of salt.

Start by slicing the bananas.

In a pan over medium heat, combine the coconut oil, agave, cinnamon, and vanilla and mix them well. Then add the bananas.

Cook for about 3-4 minutes, then flip the bananas over so they can cook on the other side. The longer you cook your bananas for, the sweeter and more caramelized they will become. I usually do about four minutes on each side.

When your bananas are done, take the pan off the heat and set it aside.

In a separate pan, combine your oats, almond milk, peanut butter, and a dash of salt. Cook over medium heat for about 5 minutes, stirring occasionally.

Add ½ of the caramelized bananas into the oats and cook for another minute.

Transfer the oats into a bowl and top it with the remaining caramelized bananas.

I also topped mine with more peanut butter, cacao nibs, and coconut flakes. Add the toppings of your choice or enjoy as is!

If you liked this caramelized banana and peanut butter oats recipe, try these caramelized peaches and pecan oats too. 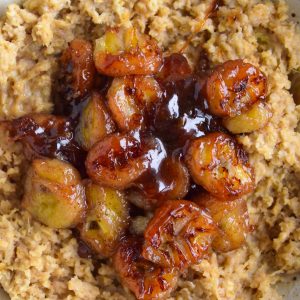