If you caramelize anything, its most likely going to be freaking delicious. That could not be more true of peaches and pecans. Peaches and pecans are already such a dynamic duo, and when you caramelize them.. well it just doesn’t get much better. They make for an awesome topping to oats, so enjoy this caramelized peach and pecan oat recipe 🙂

For this recipe you will need peaches, pecans, oats, maple syrup, almond milk, coconut oil, cinnamon, vanilla, and a dash of salt.

One thing that I always complain about is how I can never find a good peach in the US. I grew up in Eastern Europe, where it seems like the fruit and vegetables that you buy at the store or the market always taste sweeter and more delicious than the fruit I find in the US.

I’ve definitely had anyone who’s come from Europe confirm this. This problem seems to be the worst with peaches. Whenever I buy peaches in Europe, they are super soft and juicy. Sometimes when I buy them in my home in Chicago, I feel like I’m actually buying an apple. They’re hard and dry and just not that great.

The point I am trying to make is that I really love peaches, but I have never had luck with finding good peaches in the US. Therefore, to make this recipe and make sure your peaches are delicious, I recommend that you use frozen ones.

First, start by cutting up your peaches. I like to cut mine in little squares that are about 2 cm long, so more surface area is caramelized. If you’re not into the metric system, see the photo below for reference. However, you can totally cut them however you’d like.

To a pan over medium heat, add the coconut oil, maple syrup, cinnamon, and vanilla and mix them well. Then add the peaches and pecans on the pan.

Cook the peaches and pecans for about 3 minutes, then flip them over so they can cook on the other side. While they are cooking, move them around with a wooden cooking spoon, just so they don’t burn or stick to the pan.

In a separate pan, mix your oats, almond milk, and a dash of salt. Cook over medium heat for about 5 minutes.

Top the oats with the caramelized peaches and pecans.

Tip: For a more indulgent dessert, try these caramelized peaches and pecans as a topping on vanilla dairy free ice cream. I seriously wish I could insert a drooling emoji here cause its such a delicious treat!!!

I hope you try and love this recipe, it’s really one of my favorites! 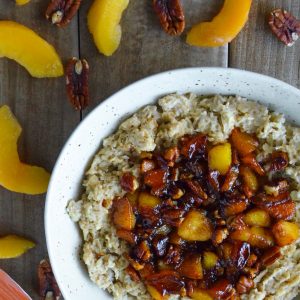 My name is Gaby and I'm a 25 year old model/ food blogger! I have been vegan for five years and love experimenting with new recipes that are good for our health, animals, and the environment! You'll find my favorites here at Veggie World Recipes!