Summer is coming it's time to bring out the summer appetizers. Dips have always been one of my favorite appetizers, and theres no better one than the seven layer dip. This has always been my favorite at summer parties and barbecues. Although big gatherings probably won't be a thing this summer, I say theres nothing wrong with enjoying a huge bowl of dip on your own too! I hope you enjoy my version of this vegan seven layer dip.

What you will need:

The basic of seven layer dips are:

The two items that have dairy are sour cream and cheese, so I had to make adjustments for those. I made my own sour cream and I used store bought vegan cheese.

Here is what you need to create your own dairy free cream cheese:

Everything else that I used was store bought, in order to make preparation easier. I will include the ratios of what I used in the recipe card below.

Note: make sure you read the ingredients on the refried beans when you purchase them. Some of them contain lard. The "fat free" ones usually don't. 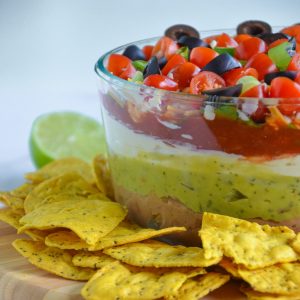 Putting together your dip