During quarantine, I have been craving comfort foods, so I have been making more and more classic recipes. I think it's really fun to experiment with plant based alternatives, and this week I decided to try and recreate the classic bacon, egg, and cheese sandwich, but make it all plant based. The result was this delicious vegan bacon, egg, and cheese breakfast bagel. Hope you enjoy 🙂

For this recipe, you will also need a bagel. An English muffin will work great too. I also sautéd some spinach as a side, but that is optional. 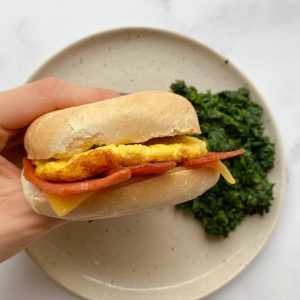